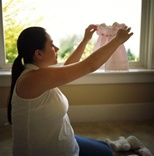 Why do some women get Gestational Diabetes?

A pregnant woman’s placenta causes an increase in her hormone levels. This may lead to her becoming less sensitive to her insulin. Gestational diabetes often occurs in women who are overweight, though it is not solely linked to overweight women.

Also, just because a mother has diabetes during a pregnancy does not mean that the fetus will develop diabetes. However, the high glucose level in a diabetic mother’s blood with pass through the placenta into the fetus.

This will cause the fetus’s pancreas to produce more insulin to take the extra glucose from its blood into its cells. There, the fetus’ cells will convert the glucose to energy or store it as fat. Sometimes the baby will weigh 10 pounds or more. Also, some birthing issue may arise because of uncontrolled glucose levels of a diabetic mother – Discuss this with your medical team.

Are you at risk?

Gestational diabetes can generally be controlled with proper nutrition and exercise,

but may also need to be controlled through medication, such as insulin.

This is an important time in your life to celebrate the gift of life and your unique role in it. We sometimes forget to take time for ourselves and our unborn baby.

Insulin is the only drug used in the treating lack of insulin in Type 1 diabetes and sometimes in Type 2 diabetics. In fact, insulin is a hormone that should be produced naturally by your body. However, If you have Type 2 diabetes your body cannot properly use the insulin that it makes which is called insulin resistance. Also, the pancreas does not make enough insulin to convert all available glucose (the simple sugar)in the bloodstream. It needs help.

If you have Type 1 diabetes, then your body cannot produce any measurable amount insulin. The reason is beta cells in the pancreas that produce insulin have been destroyed by the body’s defense system. Glucose is the fuel supply of energy for the body, especially the brain. Learning how insulin works is an important part of understanding how diabetes works.

When the body does not produce or properly use its own insulin, then the body starves because:

Where Insulin Is Found

In a non-diabetic person, insulin is produced in the pancreas by beta cells.
The pancreas gets a signal when the blood sugar level is high and responds by producing and releasing the proper amount of insulin into the blood. That insulin is designed to move sugar (glucose) into all cells including for energy and making fatty acids. Also it moves sugar (glucose, fructose, and galactose) into muscle and liver cells for storage or immediate use.

There are more than 20 different types of insulin that can be recommended based on a person unique diabetic condition and needs (see below). The major differences between the various types of insulin center on: when it starts to work, when the drug reaches its peak and how long the insulin lasts in the body.

When a person does not produce insulin naturally, he or she must take insulin from an external source. Today, most insulin is manufactured in a lab. Small amounts of insulin are obtained from pigs – the closest to human insulin.

A syringe is a device that combines a needle with a vial containing a drug. Syringes are a common method of quickly delivering insulin directly to the blood stream. In order to use a syringe, diabetics need to be sure that the injection site is clean and sterile before they can inject the needle into their skin. Often, Diabetics will inject themselves with insulin in the thigh or stomach where there is an increased amount of fat to absorb the needle.

An insulin pen looks like a writing pen, but instead of being filled with ink, the pen is filled with insulin. The delivery method is similar to that of the syringe, except that users can control the amount of insulin by turning a dial on the pen itself. The pen is ideal for diabetics that are quite mobile, as it can easily slip into a bag or pocket and can be used without drawing too much attention.

A jet injector is a less common method of delivering insulin, but is ideal for diabetics that do not want to use needles. The jet injector is a device that sends insulin into the body using a high-pressure spray of insulin across the skin. The insulin gets absorbed by the skin, thereby eliminating the need for needles and other devices.

An insulin pump is an especially useful insulin delivery method for someone that requires careful insulin regulation and has proven to be an effective method of treatment for Type 1 diabetes. The insulin pump is a small device that is attached to the body through a catheter that is located under the skin of the abdomen. The pump sends the right amount of insulin into your body through flexible tubing continuously throughout the day and in increased doses (see bolus) after a meal. Note: This method is not recommended if you will be playing contact sports or participating in other physical activities.

According to the Food and Drug Administration, researchers are currently developing an insulin patch. The FDA has approved inhaled insulin, both of which will make taking insulin easier. However, Exubra has stop being manufactured. See your doctor to discuss the most appropriate methods and types of insulin for you.